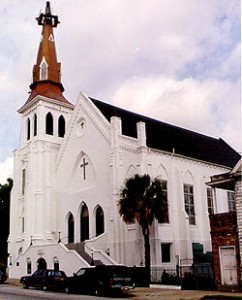 Retaining its original alter, communion rail, pews, and light fixtures the church is one of only a few unaltered religious interiors in Charleston, especially from the Victorian period.

The brick Gothic church with its tall steeple replaced an earlier 1872 church badly damaged by the 1886 earthquake.

Today Emanuel is the oldest AME church in the South, and houses the oldest black congregation south of Baltimore, Maryland.

The history of this congregation reflects the development of religious institutions for African Americans in Charleston.

Its roots stem from a religious group of free blacks and slaves organized in 1791.

Two years later, Brown and other ministers of the church were jailed for violating state and local laws which prohibited religious gatherings of slaves and free blacks independent of white supervision.’

To learn more about a planned slave revolt and the burning of the church during the crisis and more see the National Park Service Website.