On May 11th, 2018 National Geographic TRAVEL posted “Discover the Best of Charleston: Make the most of your trip with these top ten tips for the “Holy City.” Nancy Gupton wrote:

“One of the United States’ oldest cities, Charleston—nicknamed the Holy City for its abundance of churches—offers visitors plenty to experience and explore. Don’t be overwhelmed: These are our top ten tips for making the most of your time…”

Read the article for the other eight hints and to read her elaboration on each.

“During the month of January 2018, enjoy access to participating Museum Mile sites with the purchase of one low ticket price! With the Museum Mile Month pass, you can spend an entire month learning about Charleston’s rich history and culture while visiting sites in the order that best fits your schedule.

Tickets ordered in advance can be mailed to your door or you may request to have them held for pick up at The Charleston Museum, the Heyward-Washington House or the Joseph Manigault House.

PLEASE NOTE: Purchases can be made in advance online until 12/31/2017. During January 2018, ticket purchases must be made in person at a Charleston Visitor Center downtown, in North Charleston or in Mount Pleasant. “ 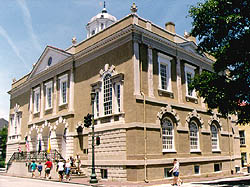 ‘The Exchange and Provost, a National Historic Landmark, was a pivotal building in colonial Charleston, where many significant events of the American Revolution and early Federal period occurred.

As Charleston became the South’s largest port, the Exchange and Custom House was built from 1767 to 1771 for the expanding shipping industry, but also served as a public market and meeting place.

After a protest meeting against the Tea Act, confiscated tea was stored here in 1774.

During the Revolutionary War, the British used the building for barracks and the basement as a military prison.

The State Legislature met here in 1788, after the Statehousewas destroyed.

When George Washington visited Charleston on his southern tour of 1791, a grand ball was held for him on the second floor.’

To learn more about the architectural style of the builiding, how it originally fronted the harbor, its original purpose, damage to the building due to the Civil War and the 1886 earthquake AND the builiding’s relationship to the DAR see the National Park Service Website OR Wikipedia. 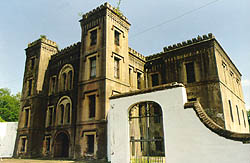 Picture and Text below source – http://1.usa.gov/r0A2rr

‘Now occupied by the American College of the Building Arts.’

‘Tours are available by appointment.’

‘The Old Jail building served as the Charleston County Jail from its construction in 1802 until 1939. In 1680, as the city of Charleston was being laid out, a four-acre square of land was set aside at this location for public use. In time a hospital, poor house, workhouse for runaway slaves, and this jail were built on the square…Increased restrictions were placed on slaves and free blacks in Charleston as a result of the Vesey plot (explained on the Website), and law required that all black seaman be kept here while they were in port. During the Civil War, Confederate and Federal prisoners of war were incarcerated here. It is one of more than 1400 historically significant buildings within the Charleston Old and Historic District.’ 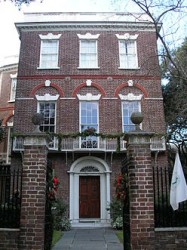 ‘Since 1808, visitors have admired the grand Federal townhouse of Charleston merchant Nathaniel Russell.

Set amid spacious formal gardens, the Nathaniel Russell House is a National Historic Landmark and is widely recognized as one of America’s most important neoclassical dwellings.

The graceful interior with elaborate plasterwork ornamentation, geometrically shaped rooms and a magnificent free-flying staircase are among the most exuberant ever created in early America.

Located in Downtown Charleston near High Battery, the house is furnished with period antiques and works of art that evoke the gracious lifestyle of the city’s merchant elite.

Today the Nathaniel Russell House interprets the lives of the Russell family, as well as the African American slaves and artisans who were responsible for maintaining one of the South’s grandest antebellum townhouses.’

It is one of the oldest plantations in the south, and listed on theNational Register of Historic Places.

‘A variety of tours are offered including the slave quarters and the family home. Tram tours are led by naturalists and visitors often see alligators, turtles, snakes, peacocks and waterfowl. The gardens are one of the oldest INFORMAL gardens in the U.S. with cooperation with nature rather than control of nature’.Adapted from article about Charleston by Judith Evans.

The house and gardens are open daily; an admission fee is charged.

Magnolia Plantation is located near Charleston and directly across the Ashley River from North Charleston.

The plantation dates to 1676 when Thomas and Ann Drayton built a house and small formal garden on the site.

(The plantation remains under the control of the Drayton family after 15 generations.).’ 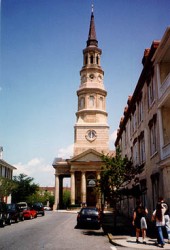 St. Philips ‘houses the oldest congregation in South Carolina and was the first Anglican church established south of Virginia.

This church is the third building to house the congregation, which was formed by Charles Town colonists.

The first church, built in 1681, was a small wooden building located at the present site of St. Michael’s Episcopal Church.

In the early 18th century, the congregation built a second brick church at the site of the current church.

It’s construction was partially funded by duties on rum and slaves.

After suffering from one fire that was extinguished by a black slave, who was given his freedom for this act, the church completely burned in 1835.

The current St. Philip’s was constructed from 1835 to 1838 by architect Joseph Hyde, while the steeple, designed by E.B. White, was added a decade later.’

For more information on the church extending into the street and prominent people buried in the graveyard visit the National Park Service Website above. 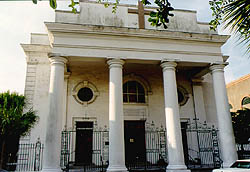 The First Catholic Church in the Carolinas and Georgia
Established August 24, 1789

‘The congregation of St. Mary’s was the first Roman Catholic Church in the Carolinas and Georgia.

A sufficient number of Catholic immigrants had arrived in Charleston by the late 18th century, that Reverend Ryan, an Irish priest, was sent to the city in 1788.

The Hasell Street site was purchased for the church by trustees one year later, and the congregation has worshiped here ever since.

The congregation first worshiped in a dilapidated Methodist meeting house that was at the site.

In 1801 the congregation constructed their own brick church. The Charleston fire of 1838 that burned much of the surrounding Ansonborough neighborhood also destroyed most of the Catholic church.

The present building was completed in 1839 in the Classical Revival style.

Its monumental form, elements and ornamental details are adapted from classic Roman architecture with typical Classical details such as its arched openings and Tuscan portico with a parapet.’

To learn more about tombstones in the churchyard, the pews, paintings, etc. visit the National Park Service Website orWikipedia.

“Founded in 1920, the Preservation Society of Charleston is the oldest community based historic preservation organization in America. Our mission is to inspire the involvement of all who dwell in the Lowcountry to honor and respect our material and cultural heritage.”