Last weekend the Steeplechase of Charleston was held at the Plantation at Stono Ferry Racetrack in Hollywood, S.C.

Read more about it.

Beginning in Mid March the Charleston Water Taxi’s schedule expanded to daily from 9 am to 8 pm. Prior to that they were mostly open on Saturdays.

There are four departure points with different departing times.  The four points are:

The Niña and Pinta are sailing into the Charleston Harbor.

Replicas of the vessels that Columbus sailed on during his journey to America will dock Thursday and open to the public at Charleston Harbor Resort and Marina Friday through the morning of Tuesday, May 9.

Free: 2 years and under

‘Journey from the past to the present and heritage to habitat at the Ravenel Caw Caw Interpretive Center. Rich in natural, cultural and historical resources, Caw Caw was once part of several rice plantations and home to enslaved Africans who applied their technology and skills in agriculture to carve the series of rice fields out of cypress swamps.

To help preserve and protect our natural resources and interpretive trails, dogs and bicycles are not permitted.’

– Over 6 miles of trails with trailside exhibits 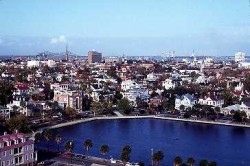 Intersection of Ashley Avenue and Broad Street
Charleston, S.C.
Picture and text below source – http://bit.ly/tkQSvT‘
The lake and its park were part of the Commons established by an Act of the Commons House of Assembly in 1768, setting aside the area forever for public use.
The tradition that the lake was developed as a small boat harbor for planters apparently has no foundation in fact.

Most likely, it served as mill pond for a succession of sawmills which operated in the vicinity.

For many years the lake was known as the Rutledge Street Pond.

It acquired the name, Colonial Lake, in 1881, in honor of the “Colonial Commons” established in 1768. Some residents still call it “The Pond.”

Fountains were placed in the lake in 1973, not for decorative purposes, but to aerate the water and prevent fish kills on hot summer days.

Gala Week used to be held in the fall of the year, with a fireworks display on the west side of the Pond, which was then an undeveloped area.

Spectators filled to park and crowded onto boats in the lake.’

Picture and Text Below Source – http://1.usa.gov/bYIbTy

‘The Old Slave Mart, located on one of Charleston’s few remaining cobblestone streets, is the only known extant building used as a slave auction gallery in South Carolina. Once part of a complex of buildings, the Slave Mart building is the only structure to remain.

When it was first constructed in 1859, the open ended building was referred to as a shed, and used the walls of the German Fire Hall to its west to support the roof timbers.

Slave auctions were held inside.

The interior was one large room with a 20-foot ceiling, while the front facade was more impressive with its high arch, octagonal pillars and a large iron gate.

During the antebellum period, Charleston served as a center of commercial activity for the South’s plantation economy, which depended heavily upon slaves as a source of labor. Customarily in Charleston, slaves were sold on the north side of theExchange Building (then the Custom House)…

Around 1878, the Slave Mart was renovated into a two-story tenement dwelling. In 1938, the property was purchased by Miriam B. Wilson, who turned the site into a museum of African American history, arts and crafts.’

It is owned by the City of Charleston. 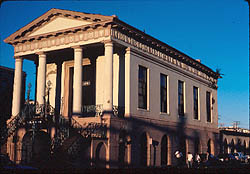 ‘Steeped in history and charm, the Charleston City Market is a popular destination for all who visit the Holy City.

Open 365 days per year, the Market is an exciting place for tourists and local Charleston residents alike.

Open 9 a.m. to 6 p.m. and sometimes later on weekend evenings.

History of the Market –

‘The Market Hall and Sheds, a National Historic Landmark, are the only surviving market buildings in Charleston, and one of a small number of market complexes still extant in the United States.

The Market is also considered to be one of Charlestons best examples of Greek Revival style architecture, exemplified by its massive portico supported by Tuscan columns.

The buildings were constructed in 1840 to 41 and were designed by prominent local architect Edward Brickell White.

The Market was the commercial hub of Charleston for many years and is an important part of the city’s commercial heritage.’

For more about the history of the market and the current occupancy visit the National Park Service Website ORWikipedia.

Fort Sumter is a federal fort in Charleston Harbor with a museum that tells the story of the fort’s role in the Civil War.

‘Where The American Civil War Began

Decades of growing strife between North and South erupted in civil war on April 12, 1861, when Confederate artillery opened fire on this Federal fort in Charleston Harbor. Fort Sumter surrendered 34 hours later. Union forces would try for nearly four years to take it back.’

The fort is constructed of over 70,000 tons and granite and rock.

To visit Fort Sumter by RV or bus, we recommend taking the 30 minute ferry from the visitor center or Patriots Point Naval and Maritime Museum. ‘Their parking area can easily accommodate large vehicles. Parking for large vehicles in downtown Charleston is extremely limited, and the public parking garage has a clearance of 7’.

‘You cannot get to Fort Sumter from Sullivan’s Island and Fort Moultrie.

Sullivans Island is the mailing address of the park and the location of Fort Moultrie and Park Headquarters.

Fort Sumter is located on an island in Charleston harbor and is only accessible by boat.

If you do not have access to a private boat, a concession-operated ferry is available.

The primary departure site is from the Fort Sumter Visitor Education Center located in downtown Charleston.

For departure schedules and fees, visit the concessioner page. 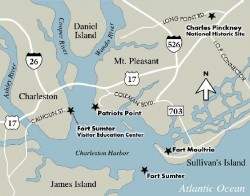 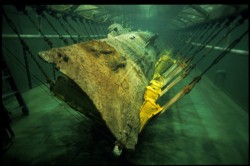 The CSS Hunley or L.L. Hunley is a previously sunken Confederate submarine which was finally found in 1995 off of Sullivans Island. It was found by the National Underwater Marine Agency team of best selling author Clive Cussler.

– The Historic Mission (and Sinking)

Wikipedia.com article on the L.L. Hunley

‘Weekend Tours of the Hunley

Walk-up tickets are also available on a first come, first serve basis. These tickets do not have a service charge. Tickets for Friends of the Hunley members, senior citizens, and military are discounted to $10.00. If you are eligible for this discount, please purchase your ticket at the door.

The Hunley is located at:

– If you have questions about pre-reserved tickets, please contact Etix.com at support@etix.com.

– Group tours (20+ guests) can be scheduled for weekdays with advance notice. For more information, contact Josephine Starnes at 843.743.4865 ext. 28 or email herjstarnes@hunley.org

Its mission is to preserve and interpret the cultural and natural history of Charleston and the South Carolina Lowcountry.

We invite you to explore this rich, varied history at the Museum and its two National Historic Landmark houses.

All are located downtown, in America’s Most Historic City.

Inspired in part by the creation of the British Museum (1759), the Museum was established in 1773 by the Charleston Library Society and is commonly regarded as America’s first museum. Its early history was characterized by association with distinguished South Carolinians and scientific figures including Charles Cotesworth Pinckney, Thomas Heyward, Jr., Reverend John Bachman and John J. Audubon. Many of the original collections were destroyed by fire in 1778 and operations were suspended during the American Revolution; however, collecting resumed in the 1790s.’

‘First opened to the public in 1824, the Museum developed prominent collections declared in 1852 by Harvard scientist Louis Aggasiz to be among the finest in America.

Operations were temporarily suspended due to the Civil War, but began again shortly after the conflict.

Progressively acquired from the late 18th century to the present, the Museum’s collections now present the oldest-acquired and the most comprehensive assemblage of South Carolina materials in the nation.

Information and Prices subject to change